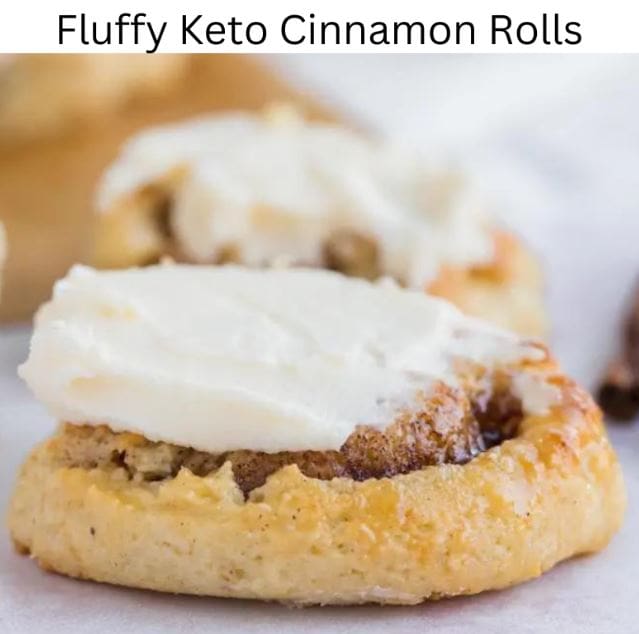 The most amazing and delicious Fluffy Keto Cinnamon Rolls recipe you’ll ever taste. Made with authentic cinnamon roll flavors, almond flour, and WITHOUT using cheese to make this low carb breakfast pastry, keto pastry dough!
Topped with your choice of two sugar-free, gooey icing options, filled with a sweet, buttery blend of spices, fluffy, golden-brown keto buns . Without the effort of making keto fathead dough, these are a quick fix for a roll craving . These buns are perfect for special occasions such as Mother’s and Christmas Day or for an amazing breakfast in the mornings. They are going to be the best rolls you’ve ever had. After trying this one, we are sure that you will never go back !

Because they can be made the night before baking, these easy keto cinnamon rolls are the ultimate make-ahead breakfast treat.

The wet is now

It should be rolled flat.

What is the best way to make keto cinnamon rolls with almond flour?

The pastry dough in most keto cinnamon roll recipes is made with fathead dough. The fathead dough is made from mozzarella and cream cheese. In low carb baking, Fathead dough is an excellent substitute for dough. It’s mostly used for pizza dough, but it can also be used to make cinnamon rolls, bear claws, bagels, and donuts.

The disadvantage of using fathead dough to make low carb cinnamon rolls is that the rolls taste like cheese. When you bite into a cinnamon roll, you’ll notice an underlying cheese flavour.

This keto cinnamon roll recipe does not call for the use of fathead dough. Instead of cheese, we use a combination of almond flour and protein powder, as well as some leavening agents, to make a fluffy cinnamon roll. The xanthan gum in this recipe helps to keep the dough together. In other low carb cinnamon roll recipes, the structural roll replaces the need for melted mozzarella cheese.

Cinnamon isn’t the only spice that contributes to the delectable keto cinnamon rolls.

This unique spice blend found in the dough and filling creates an earthy, complex blend of flavours. Here are the ingredients you’ll need to make these special cinnamon rolls:

Although they are not required to be frosted, I believe keto cinnamon rolls are always better when they are.

Cream cheese, softened butter, and sweetener are combined to make the cream cheese frosting. Both are delicious and make excellent low carb pastries.

How do you keep keto cinnamon rolls?

These low carb cinnamon rolls are best when eaten fresh the same day, but they can be stored in an airtight container at room temperature or in the refrigerator for a few days.

You can prepare these keto cinnamon rolls ahead of time! They are ideal for Christmas morning breakfast. Simply prepare your cinnamon rolls the night before, but don’t bake them until the morning of.

How many carbs are there?

The carbs for this keto cinnamon roll recipe are as follows:

Carbohydrates in total: 4.2g
1.9g net carbs
Of course, these figures will vary depending on the size of the serving, the frosting, and the amount of frosting used.

Is cinnamon permitted on the keto diet?

1 tablespoon cinnamon is used in the entire recipe, which serves 8 people.