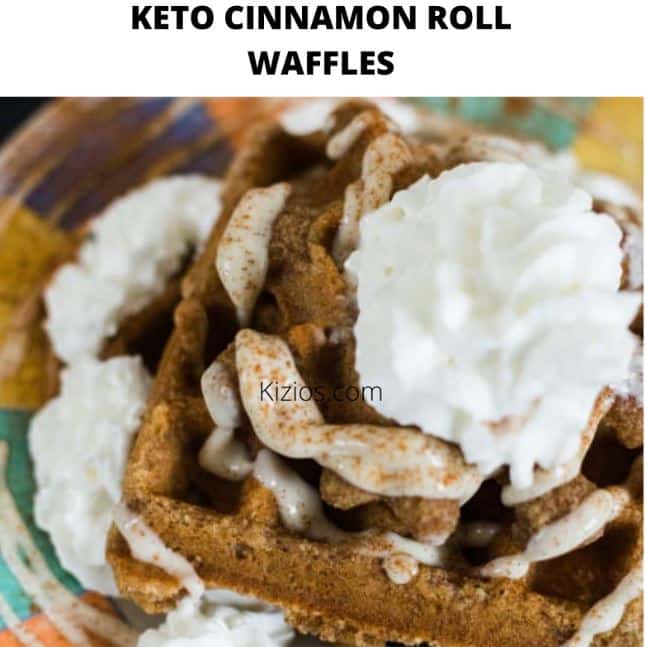 KETO CINNAMON ROLL WAFFLES. I’ve tried a lot of cinnamon rolls and the ones made with fathead dough are by far have been my favorite. But if it would hold up in a waffle iron, I wasn’t too sure. I mean, I figured it would burn easily because it’s mostly cheese.
Topped with a sweet cream cheese icing, homemade cinnamon roll flavored Belgian waffles! A low-carb breakfast has never been better!
Really easy to make, these Keto waffles are such a nice change from traditional waffles with all the added flavors of the beloved cinnamon buns!
And a tasty cream cheese icing is drizzled over the top to add even more cinnamon roll flavors to these gluten-free waffles. And the best news(only 2 net carbs per waffle). You can’t beat that!

Along with a little oat fiber mixed in with the almond flour, whipped eggs whiles make these waffles light and crispy and guaranteed Keto friendly!

I just made a delicious and super easy waffle and with a yummy cream cheese frosting, topped it.

I think it should work fine if you want to give it a try with coconut flour instead!

You’d definitely want it similar to a cake batter for the consistency.. and the xanthan gum is a MUST because it didn’t work when I’ve tried it without it. It was super disappointing and the waffle just fell flat.